How many times will I find myself in Dallas?  That thought propelled me out into the thick night air.  Carpe diem and all that.  And just maybe also a juvenile, morbid fascination helped. After all, I could hardly expect to learn something new about the most studied 6 seconds in history.

We know Dealey Plaza from one perspective, the one Abraham Zapruder provided us with when he accidentally filmed the murder of John F Kennedy.  The splendid motorcade is bathed in sunlight and the crowd is jubilant.  Abruptly, JFK’s movement tell us that something is very wrong.  Seconds later, our worst fears are realised as we see what can only be a fatal shot to his head. All is confirmed in Jackie Kennedy’s dreadful panic.  Finally, the car whisks JFK out of the sunlight and into the darkness of the underpass at the foot of Dealey Plaza.

Dealey Plaza had been built 22 years earlier.  A work of the New Deal, the plaza is a memorial to the founding of city of Dallas.  Like so many spaces in the US, it gives priority to cars (unlike the pleasant Klyde Warren Park in downtown Dallas), but it is still very accessible.  The plaza consists of understated ornaments in a muted late art-deco style.  It is a heart-shaped gateway to the city.  The underpass we see at the end of the Zapruder film was that gateway.

Of course, that is not how we think of it today – we think of Dealey Plaza for a violent crime and a titillating enigma.  “Who killed JFK?” is byword for conspiracy theories.  But unlike faked moon landings or desert-bound UFO warehouses, it raises a much deeper question: can one individual change the course of history?

One version of events tells us that a single young man with a mail-order rifle manages to change the path of peace and reconciliation that JFK had put the US on.  The lone gunman committed one of the world’s great powers to decades of armed stand-off, a series of bloody proxy wars, and the continued subjugation of its own ethnic minorities.  The other view holds that bigger forces are at work -that such forces are always at work.  They teach us that JFK’s death is part of a much bigger picture, that of the self-perpetuating “military-industrial complex”, or some other force of historical materialism.

There are no happy answers.  We either accept the awful thought that one individual through a single act of violence is capable of plunging the world into deep conflict (Gavrilo Princip being another example), or we hold that they are not, which is even worse.  Oswald acting alone represents some form of human validation.  Conspiracy wouldn’t just show that governing institutions are violent and corrupt, it begins to suggest that nothing we do really matters.

I turned the right from Houston Street onto Elm, the corner of the former book depository, and I was now on the same route as JFK’s motorcade.  And there it was: instantly, intimately familiar, a place I had been many times before in my thoughts.

At 11:30 at night, the plaza was virtually deserted.  It remains largely as it was in 1963.  I drifted, almost invisible in the gloom, toward the bottom of the plaza and the grassy knoll.  Climbing up to the back of the picket fence, I would greet unidentified assassins, shadows in darkness, still waiting for the coast to be clear after 50 years before they can show themselves.  I moved silently to the plinth Zapruder stood on to film the president. I knew this place, I had someone else’s memory of what happened there, a memory that was more vivid than many of my own.  I then found myself back at the top of the plaza, looking up at the 6th floor window.  For a brief moment, there were two of us, the still shape of Oswald’s face discernible in the shadows, looking down impassively on Dealey Plaza, as baffled as the rest of us by what had taken place there.

Walking back to the kerb beside where the murder took place, I looked over to my right.  The underpass now is lit in vivid sodium orange.  The gateway was the light.  I had felt welcome, tranquil even, in Dealey Plaza, but I did not want to go near the underpass.  And with that realisation, I knew my brief time as a ghost was over. 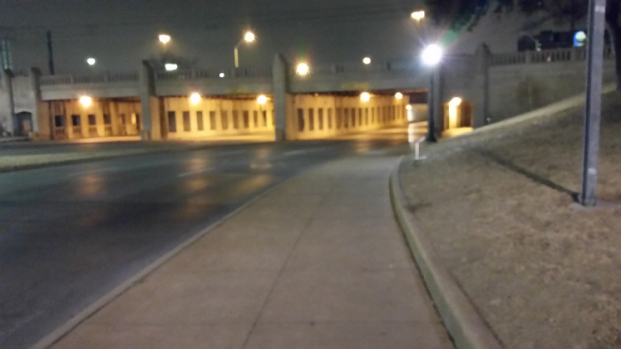 Many feel that the facts of JFK’s assassination have been satisfactorily resolved.  Public opinion does not agree.  And the deeper questions, of course, are unlikely ever to be.  But self-knowledge is also knowledge.  My short trip to Dealey Plaza gave me a glimpse of Sophie’s World, a sense that I was existing in other people’s thoughts.  It felt more like being in a dream than any dream I’ve been in.